Home Planning How we chose our architect

How we chose our architect

Way back in the beginning, when we decided to build a house, we always knew we wanted something thermally efficient, and that would make use of the natural resources we have for heating and cooling. There wasn’t much of a discussion about it, it was just… obvious. 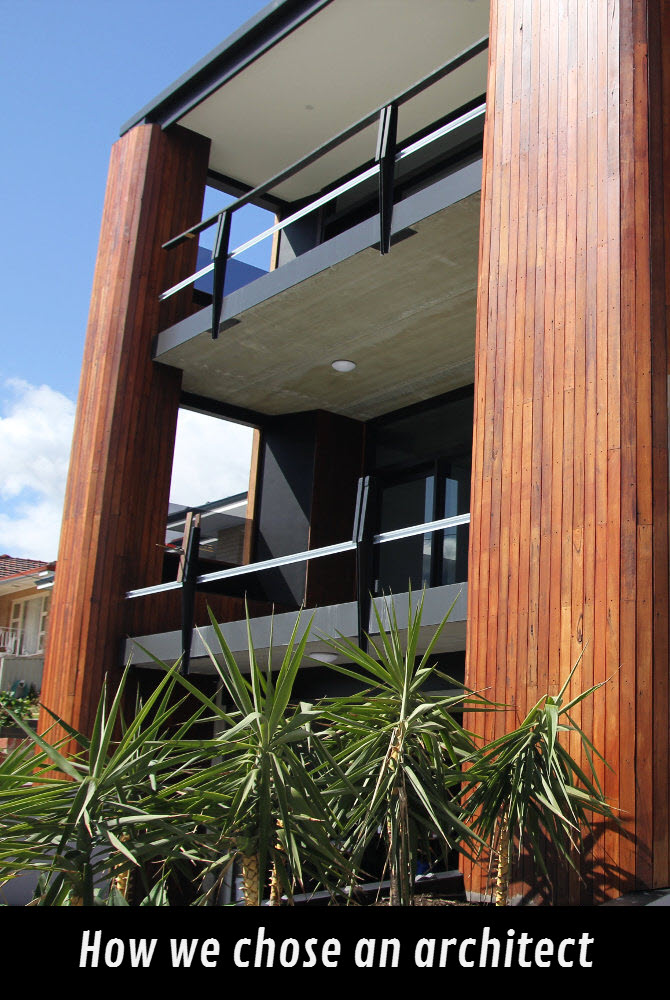 What wasn’t so obvious was how to go about getting that right design because our block has one of the worst orientations — it’s angled at 45° to north (our architect eventually said it could have been worse, so that was reassuring).

We pretty much knew we were going to have a custom design. However, we held a thin ray of hope that perhaps we’d find something off the plan that would suit our block, so we did the obligatory hunt around the web for something — but there was nothing.

We tried drafting a design ourselves with our requirements in mind, but the results were kind of dismal. I remember late night sessions with cut-out pieces of paper that we tried to piece together into a cohesive layout, and I remember looking at the result and thinking we were slightly mad. (I’m sure I took a photo but I can’t find it anymore. It’s probably for the best.) Even though we were aware of passive solar design principles, we didn’t feel confident that we were getting the best design for what we wanted to achieve.

So our decision to engage an architect was pretty much cut and dried, although it took a while for us to resign ourselves to that fact.

We had 2 main problems in choosing architects for the shortlist:

The search for a super-architect

We began our search for an architect/designer in earnest in June 2012, and it took us a full year to make up our minds (let’s just say that we’re not known for rushing our decisions). We made appointments with 4 architects we’d found that mentioned passive solar design on their website. 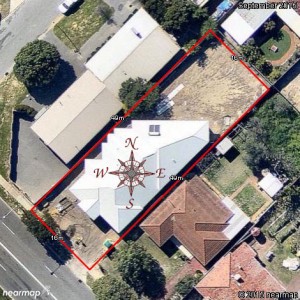 The first two were a wash. One seemed completely uninterested until we mentioned strawbale, when he seemed to perk up at the idea of doing something a little different. Not that we ever intended to build a strawbale house, it was just something that was mentioned in the context of building materials. The other one came across as a pompous ass who wouldn’t lower himself to do something so ordinary.

The next two were very promising and we were relieved that we didn’t have to sit through more tedious meetings with Architects With Attitude.

We asked for some references from the two short-listed architects, and the outcome of this was probably the decider for us.

The first architect gave us contact details for a recently built house to look at. The second architect gave us a list of several addresses and contact numbers from which we could choose. We did drive-bys of all the houses, but chose just one to look at. Both houses we viewed were not far from where we were living, assessed as 9 stars and 8 stars respectively.

Both home owners were positive in their comments about their respective architects, so there was little to differentiate from them in that respect. In the end, we went with the architect who designed the house we both liked the best.

Who we chose and why

By now you know that this is Solar Dwellings. The reasons being:

Also, the owner was an all round nice guy and happy to share as much information as he could, which I am now attempting to pay forward!

We also felt that in our conversations with Solar Dwellings, they had the most experience in the passive solar design field, which made us more confident that we would get a good design that took into account the difficulties of our block. They also seemed to pay particular attention to universal design principles, which was also a no-brainer for us.

The other architect also displayed a lot of knowledge of passive solar design principles and seemed quite passionate about it, but was more strict with the way they wanted to implement those principles. Which is not necessarily a bad thing, but we felt that because Solar Dwellings had more experience, they knew when to bend the rules whilst minimising the impact to performance. The other factor in favour of the other architect was that they had worked with Solar Dwellings before, so we felt sure that they could walk the walk, so to speak.

The other factor that played into our decision was that Solar Dwellings were architects who could offer project management as part of the package, whereas the other one was actually a builder who had their own architect. We felt more comfortable in having the two separate bodies, and thought that this would offer us another level of protection.

I think our decision to use Solar Dwellings was the correct one. The problem with only being able to work with one is that there is always the “what if” question in the back of your mind.

If I were to go through the exercise again, with what I know now and more familiarity with other Perth firms, I would build my shortlist differently. But would probably end up with the same result!

Solar Dwellings also does a lot in the way of education and advocacy. Here’s a little video they produced, explaining about thermal mass: