Something that we have been hanging out for is the energy report. This is why we engaged the architect in the first place. Our block has a difficult orientation and none of the off the shelf plans were even remotely suitable. Our architect told us that our design should perform as a 9.5 star, and rate at 9 stars. But we were also told that it might be slightly less, but no matter because it would still perform well.

When we received our energy report from the builder, we got a nasty shock. They had only rated it as 6 stars. I was furious! I told the builder that we had expected more and would follow it up.

Mr T, being very practical, got hold of some energy modelling software and tried to replicate the results. After a thorough investigation, he concluded that the modelling was incorrect. The input values did not match what was on the plan. It appeared to me that they’d simply gotten a work experience student to input some random values into the software. I’m still thoroughly disgusted, but accept that the house actually has a good rating now. If we want an “official” certificate, we will need to hire an independent assessor (we got a name off the architect).

Interesting Fact: The energy rating certificates are only valid for a year, so if you want to use it as a selling point you will need to get the house re-assessed and a new certificate issued.

So, what does this star rating actually mean? Here’s some copy and paste from the NatHERS website (for those in NSW, BASIX accepts NatHERS software results as one way of meeting its separate targets for the heating and cooling performance of the building shell):

NatHERS house ratings use computer simulations to determine the potential thermal comfort of Australian homes on a scale of zero to 10 stars. The more stars, the less likely the occupants will need cooling or heating to stay comfortable.

A range for star ratings, called a ‘star band’, is set for each climate zone taking into account the extremes of the local weather conditions. Each star band set allows for a comparison of buildings within and between climate zones and is based on the maximum energy consumption per unit area (MJ/m2) loads for each half-star level.

It’s interesting to note that the wider Perth area actually has several different climate zones. This is taken into account by the modelling software when determining the star rating. 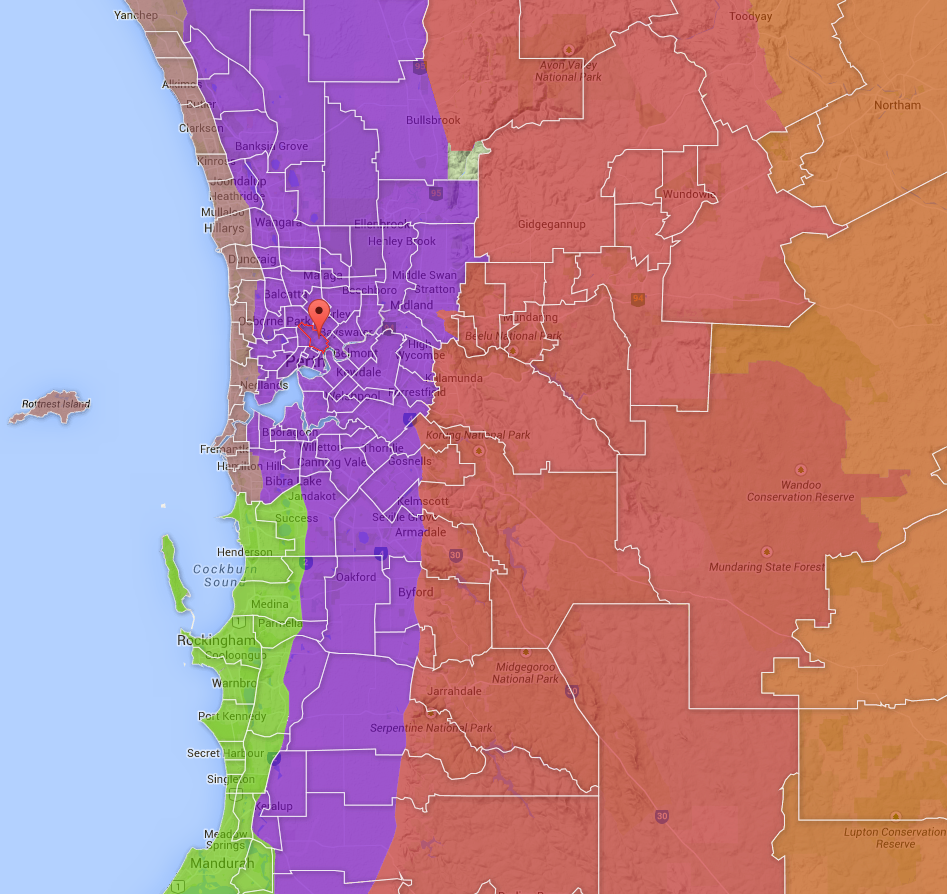 The star rating represents how much energy you will need to heat and cool your home in your climate zone.  All new houses built must achieve a minimum rating of 6 stars.

We sit in climate zone 13, which means that a 6-star rating means that it would take approximately 70MJ/m2 per year to heat and cool our house. This number is what’s known as the “thermal load”.

(This is where the modelling breaks down a bit, because it assumes a certain behavioural pattern. For example, it assumes you will get up at 8am and have your air-conditioning running all day until 6pm, or something like that. Nevertheless, it’s important that there is a baseline for comparison purposes, even though you may in actual fact use more/less energy to heat/cool your home).

When Mr T did his investigations, he worked out that our rating, as designed, should actually have come in at around 8 stars. Our thermal load should have been calculated at around 30MJ/m2 per year. The only useful thing our report highlighted was that our primary problem would actually be with heating, as we would use more energy to heat the house than we would to cool it. This is not uncommon in Perth. We get nice sea breezes which help with cooling a house down, but getting the right amount of heat into the thermal mass is more difficult.

Basically, the entire south side of the house would be on the cool side, hovering at around 18C in winter. The most thermally stable rooms are the library and my lady cave. We’re now doing a bit of tweaking to see what we can do to improve performance and get it to at least 9 stars.

Anyway, enough talk, here are some graphs! These results include enhancements to window treatments, which are not included in a standard assessment but more accurately reflect the performance potential. (Click to embiggen for more detail).

Below are some temperature charts of the bedroom areas and living areas during a cold week in July. The master bedroom appears to be reasonably cosy during winter. Next best performing room is my lady cave. The Study (which is actually the guest bedroom) and Bed 3 (Mr T’s study) are both a fair bit cooler and may need some heating.

The living areas appear to be doing quite well. The open plan living/meals/kitchen zone remains mostly between 20-25C, which sounds lovely. The library seems to hover around 20C, which means we may need a bit of heating, but it’s not as bad as I thought it’d be. The laundry is a bit chilly, but I don’t plan on spending a lot of time there anyway! 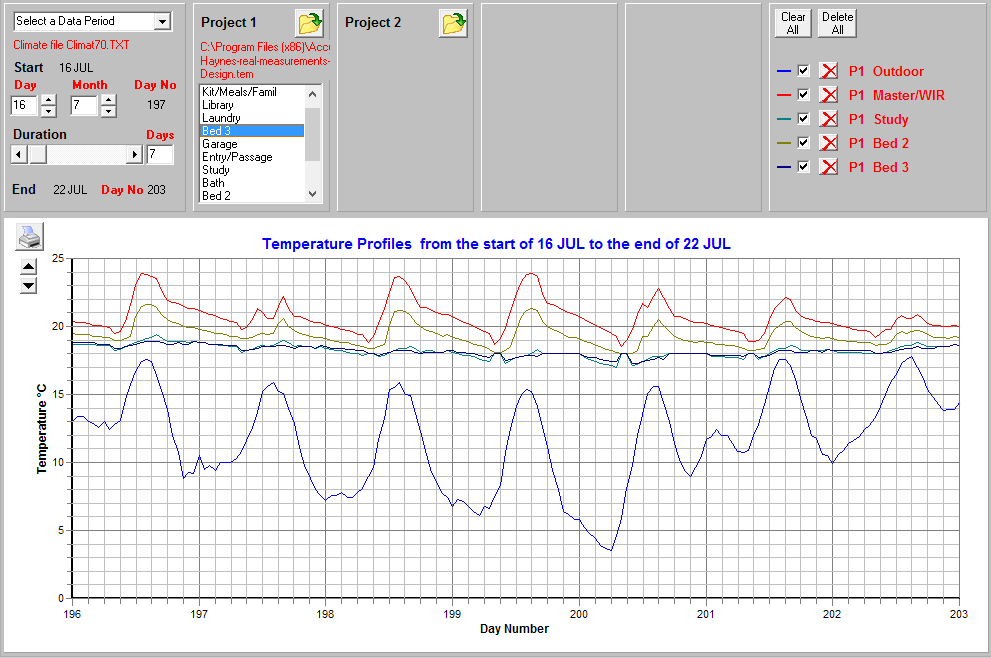 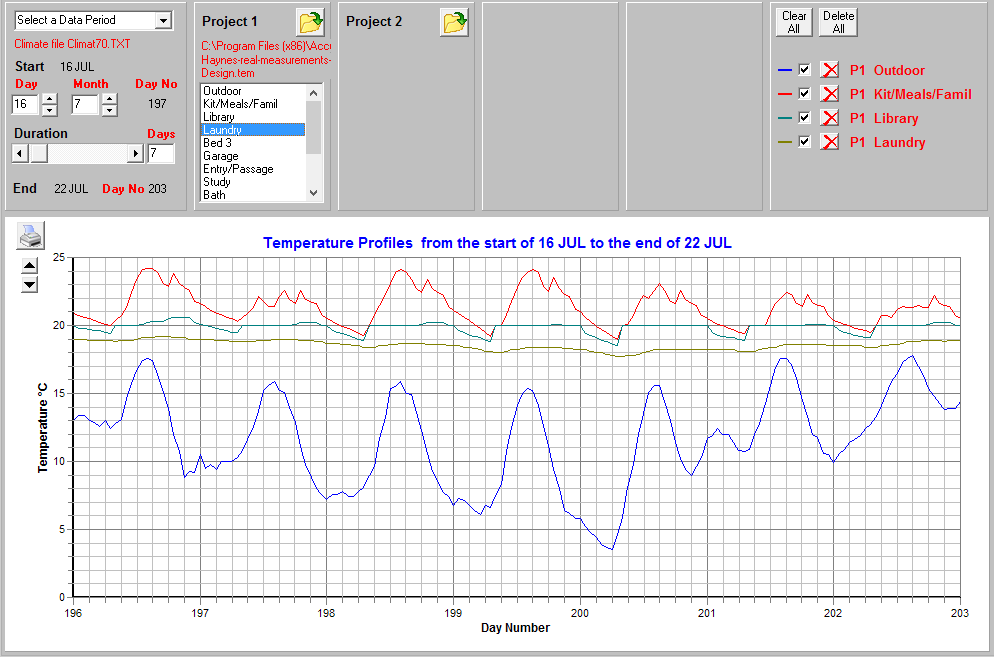 Below are some temperature charts of the bedroom areas and living areas during a hot week in January. The master bedroom appears to stay below 25C in the evenings, which I think will be OK. The Study (actually the guest bedroom) is a little warmer though. The two actual studies seem to be cooler again though, so they should be nice to spend some time in during the hot weather.

The living areas appear to be doing OK too. The temerperature in the open plan living/meals/kitchen zone hovers around 25C, which should be fine. The library is even cooler, so again that should be quite pleasant in summer. 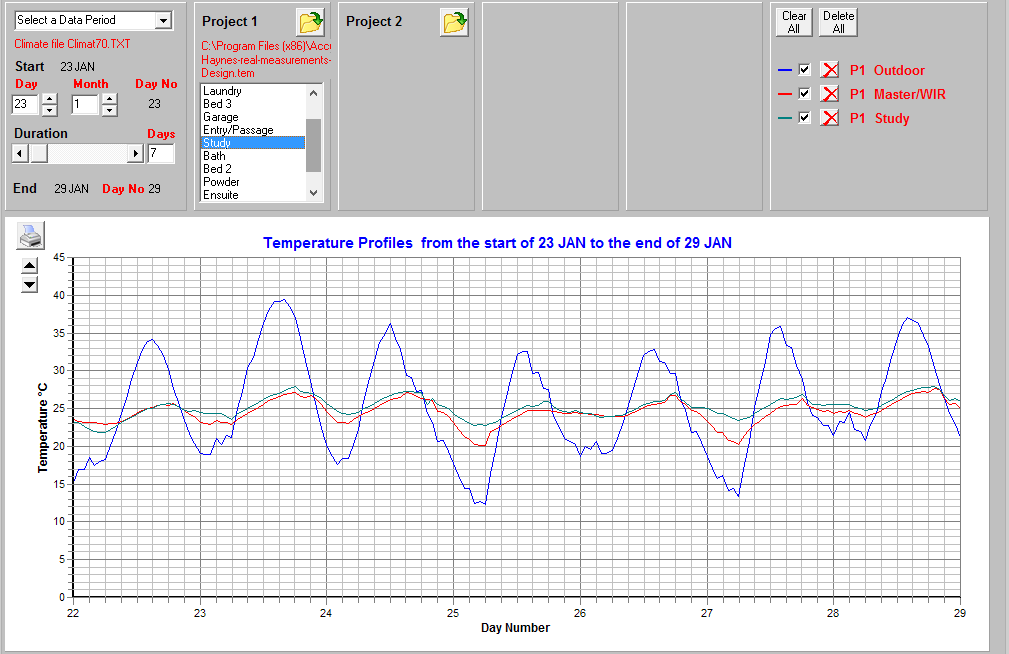 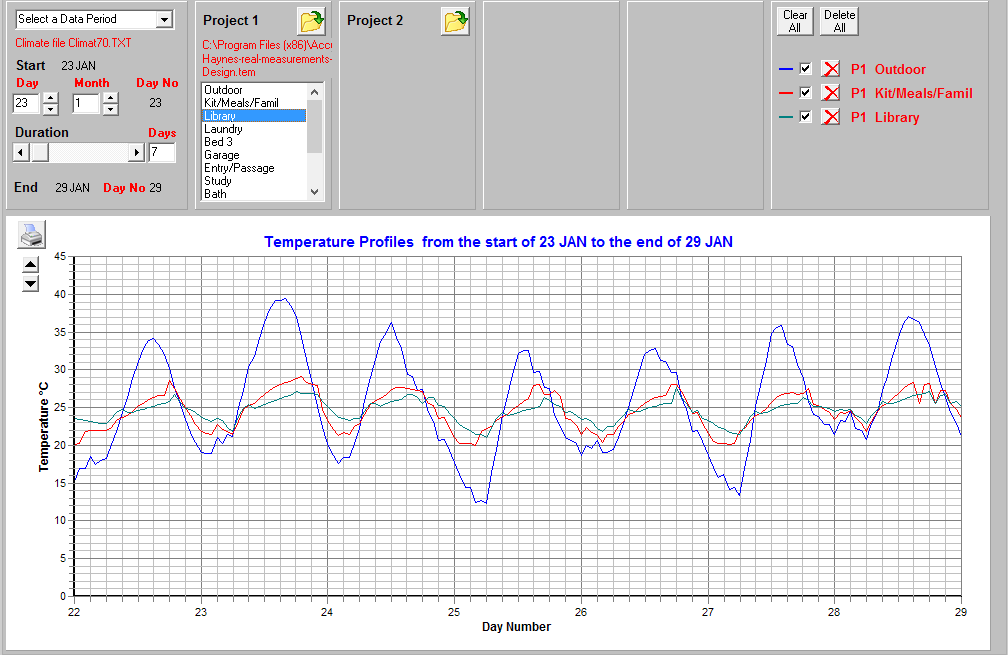 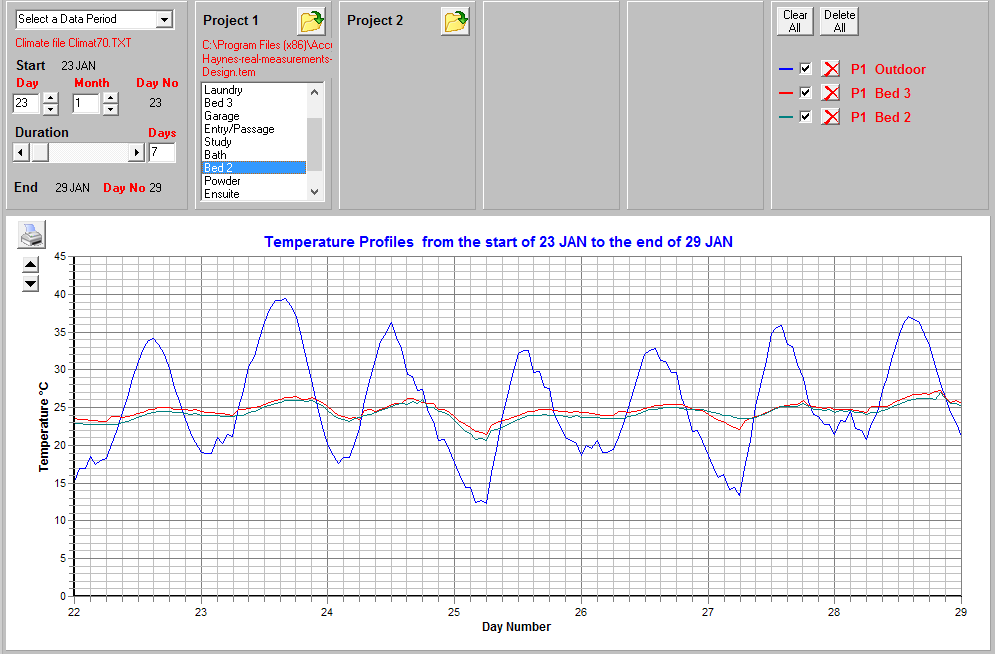 There is a lot of chatter about how effective double-glazing and low-E (low emissivity) glass are and to what effect they can be used in solar passive design. To some extent they are generally quite good and will improve performance when used correctly. It’s often recommended to use low-e glass on west and east-facing windows, but that’s not always the best place to use them.

If we wanted to consider this, we were advised to use laminated low-e glass on the west side only (i.e. the study/guest bedroom). On the east side, using low-e glass would actually reduce the amount of heat we would get into our slab in winter for those east-facing rooms. As we saw from the temperature graphs above, these will be OK in summer but a bit cold in winter. The laminated glass also has the added benefit of noise attenuation, which is a serious consideration for us.