So I was bragging about having soakwells delivered to some of my peeps, only to be greeted with a mixture of joy at progress, and confusion about what they were. 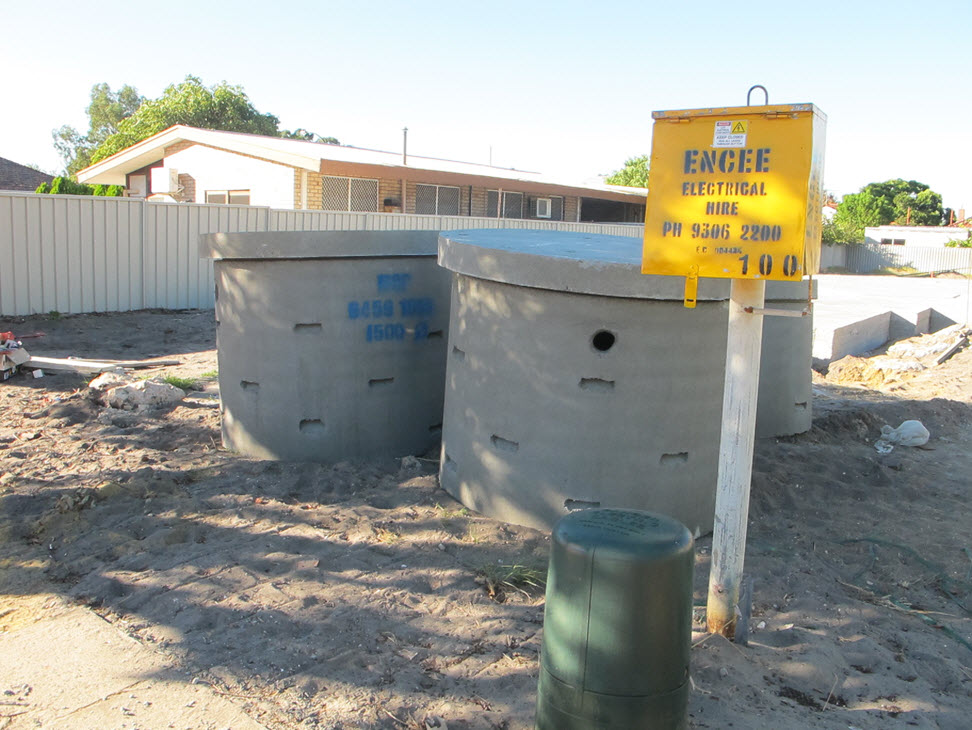 I thought it was just a thing everyone did, but apparently not. So I ended up doing a bit of research, and here is what I found out.

The buzzword is “Water Sensitive Urban Design” (WSUD).  It’s actually not so new, it’s been around since the 1990’s and eventually led to the signing of the National Water Initiative in 2004.

WSUD takes the approach that urban stormwater runoff is a water resource that should be better managed, instead of it being a nuisance. The main principle regarding stormwater is to reduce runoff from the urban environment while at the same time providing for infiltration and groundwater recharge. 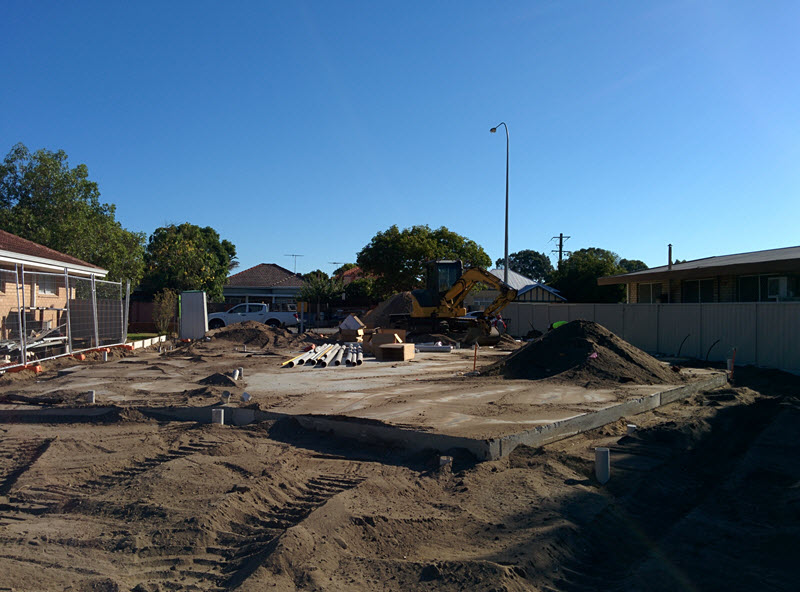 Soakwells are dug into the ground, which means dirt goes everywhere!

The idea is, rather than diverting stormwater to pipes that drain directly into rivers and streams (or sewage plants), stormwater is treated by capturing sediments, pollution, and nutrients through the retention and slow release of stormwater.

Residential development on the Swan Coastal Plain has differed from other areas in Australia, in that there has been a requirement for all rainwater that falls on a property to be retained and infiltrated using soakwells where soil conditions are appropriate… The stormwater then penetrates the soil and recharges the superficial aquifer.  (Source: Stormwater Management Manual for Western Australia, Department of Water)

Residential soakwells seem to be standard practice in Perth, but only as far as  private property goes. It seems that runoff from roads and other urban areas still go into drains.

A soakwell is a cylindrical (or cubic) structure (usually made of either plastic or concrete) with holes in it . They usually have a lid on top but no bottom, as you want the water to soak into the soil. Water gets into the soakwell by means of a pipe that collects runoff from the roof or other impermeable areas. There seems to be no evidence to suggest that either plastic or concrete soakwells are better. Well, not that I’ve been able to find. There are people with opinions, of course, but I’ve not seen evidence to back up those statements one way or another. 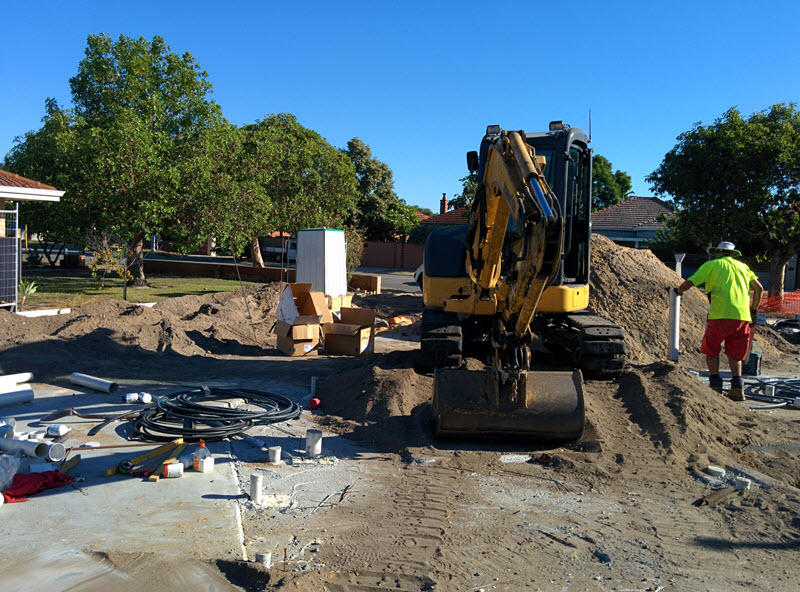 The digging continues. And in go the pipes!

Are Soakwells Required by Law?

Regulations regarding soakwells (or more specifically, stormwater management) vary from council to council in Perth. Most councils require them, but some of them don’t. They may not be required if you have another way of catching stormwater, such as a rainwater tank.  If you’re building and this is a requirement, it should be caught by the engineers when it goes through the planning process.

Your builder will probably include them in the base cost anyway, but you should check this. If after the contracts are signed, the builder’s plumber decides that another soakwell is necessary, you would need to sign off on this. I’m not sure how this fits in with legal requirements, but property owners have a legal responsibility to ensure that any water that lands on their property is retained on that property. If you have a water tank, soakwells are often still recommended in case of overflow during severe weather. 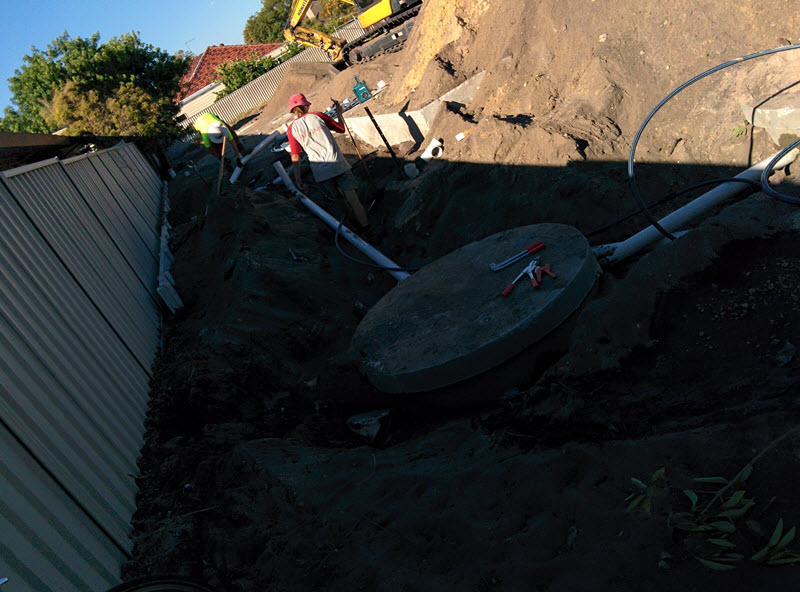 Soakwell well and truly dug in. With pipes, because the water has to get in somehow.

Soakwells apparently require maintenance. I read somewhere (but damn if I can find the reference now!) that they can be prone to the same problems that plague rainwater tanks – sediment build-up, mosquito breeding, algal blooms. But I think the main issue would be tree roots getting in. Tree roots get in everywhere they can! If you notice erosion or flooding, chances are the soakwell needs maintenance. That sounds like a big job to me, luckily there are companies that can do this. 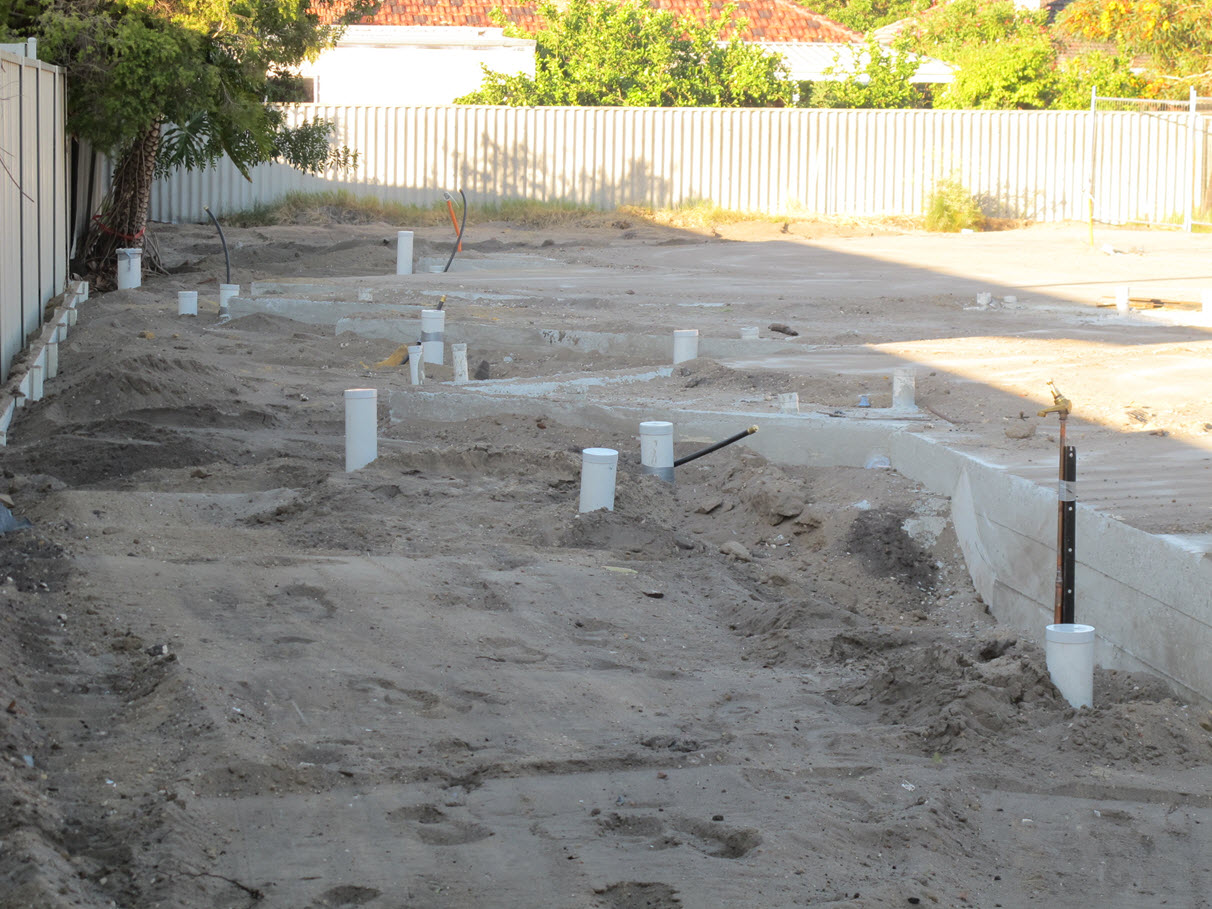 Getting down and dirty, pipes everywhere! We now also have a water tap.

What About Landscaping Around a Soakwell?

There is zero information I can find online about this subject. I think most of it’s common sense assuming you have knowledge of where and how the soakwells were installed. Even though they’re buried, they’re not buried that deep. Typically, they will have around 400-600mm of soil on top, so you’re not going to be able to plant large trees over them.  Smaller soakwells may be buried more deeply than larger ones, perhaps because they’re just easier to handle. The architect made an offhand comment that you shouldn’t pave over a soakwell either, though I’m not entirely sure why that is.

If you’ve managed to read this far, you’re one brave soul! Tell me, do you have any soakwell experiences or knowledge to share?