Tuesday was a momentous occasion – that was the day we got our keys! Key handover is the time when the house passes from the hands of the builder back into the hands of the owner. The culmination of all the hard work over the last 3 years! 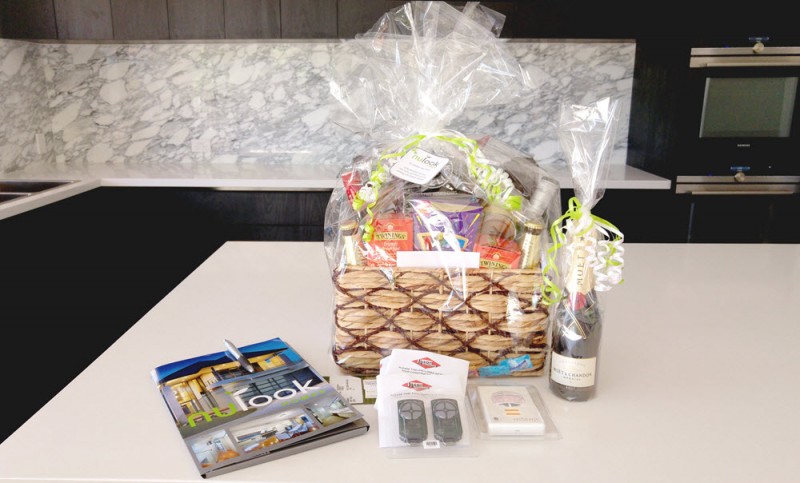 Our gift basket, papers, and keys from Nulook Homes

We picked up the bank cheque the day before, and brought it with us to the house at 10am, which was the time that had been organised for key handover. This is normally done at the office but the lovely Laura, who amongst other things manages NuLook’s social media, was eager to have a tour of the house, having been a long-time follower of this blog (hi Laura!).

When we arrived, it was all go-go-go! The supervisor had already been there for a couple of hours and his trades were there doing last-minute fixes, and this was also day 2 of the final sanding and finishing of our marri floorboards (which we had organised independently and Nulook kindly accommodated our request to begin this before handover).

Laura wanted to get some handover photos so we trooped outside and helped to wrap a ribbon around the doors (she’d arrived early to get this done but the place was buzzing and the doors were being used).

By the way, big bows are hard to tie! I think Laura’s first attempt was probably the best. So then we posed for some photos, cut the ribbon, and went back inside.  I gave Laura a tour of the house, and then she left. Our supervisor then explained which key was which and engaged the locks, which in turn disengaged the builder’s key.

The house was officially under our control! Mwahahaha!

The sanding machine had started up again by this point so we went outside and went through the warranties and so on. After a bit more of a chat, we thought we should probably go and let the guys get on with their work. There are still a few bits and pieces to do, which will get done by the end of the week.

The list of outstanding things for us to do is rather long. Most things have been organised or are already in progress, including:

We’re working our way through the rest of the list, slowly but surely. Once the floor protection comes off, I promise I’ll post some photos of the open plan area.