Friday was a fun and interesting day – we got to inspect our marble slab. Two of them, in fact – one for the kitchen and one for the ensuite and bar. Our stone is being supplied by Bravvo Stone, so that’s where we ended up. I learned a few things that day.

Marble Slab Inclusions to Watch for

If you get a choice in your slabs, here are some things you might want to watch out for. We didn’t get much choice in ours – all the white marble came from the same block, so they had the same inclusions. And there was only one left of our black marble. But we’re happy with what we ended up with anyway.

We chose the Statuario Chorica white marble for our kitchen splashback. I’d originally wanted Calacatta marble but it was too expensive, so settled on the Statuario Chorica as the next best option that had the whiteness I was looking for. I think I’ve ended up liking this one even more now.

We really wanted to use a white marble in the kitchen but having done a couple of tests on some samples we’d previously procured, we decided it etched too easily to be used on the benchtop. And it would drive us barmy knowing the etches were there. So on the advice of an interior designer, we ended up deciding to use it as the splashback, and use an engineered stone for the work surfaces. The designer chose Caesarstone Pure White but we decided to go with Essastone Bone White instead, as it was cheaper and looked the same to us.

So, as we inspected our slabs, two main inclusions were pointed out to us. On the white slabs, there were some particularly dark splotchy bits, which I was convinced was sticky residue left over from some stickers. So I went to rub them off, but found that they were in fact, part of the actual stone. There were 2 main dark splotches that kind of spoiled the look a bit. 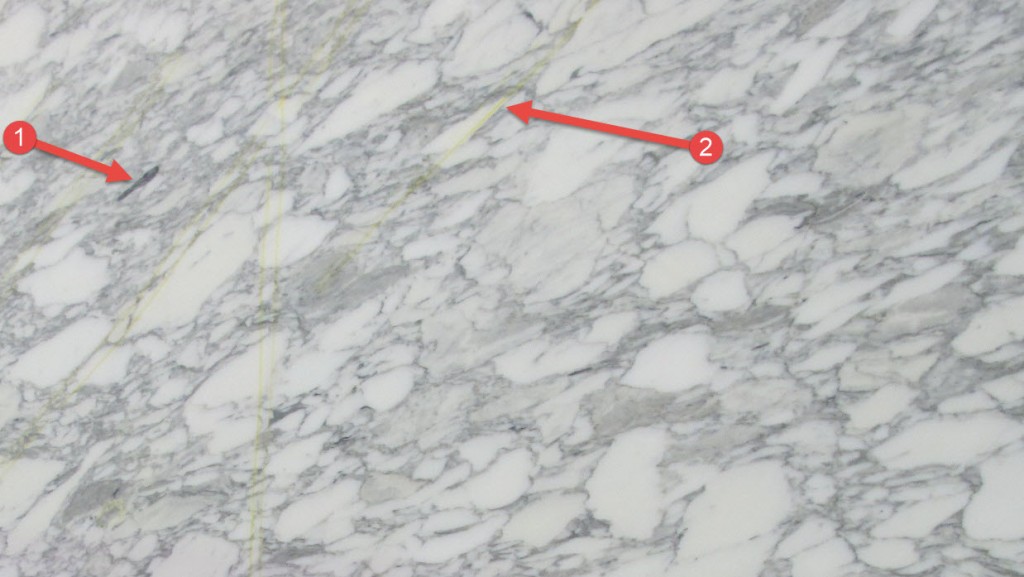 The second type of inclusion on the white marble was marked with yellow chalk marks. These are tiny hairline fractures, barely visible. They appear as very thin white lines.

The black marble, Grigio Carnico, was the one we chose for our ensuite vanity and bar benchtop. I chose it because it had the right amount of greyness to it, rather than chocolatey as most dark stones look.

Again, 2 types of inclusions were here. The first one that caught my eye was a dusty streaky appearance to the stone. Again, I went to wipe the dusty streaks off the stone, only to find that it wasn’t dust, it was actually part of the stone. Foiled again! The second inclusion was indicated by a squiggly white line. The squiggle you see in the picture below is actually a marker, but it indicates a fracture. 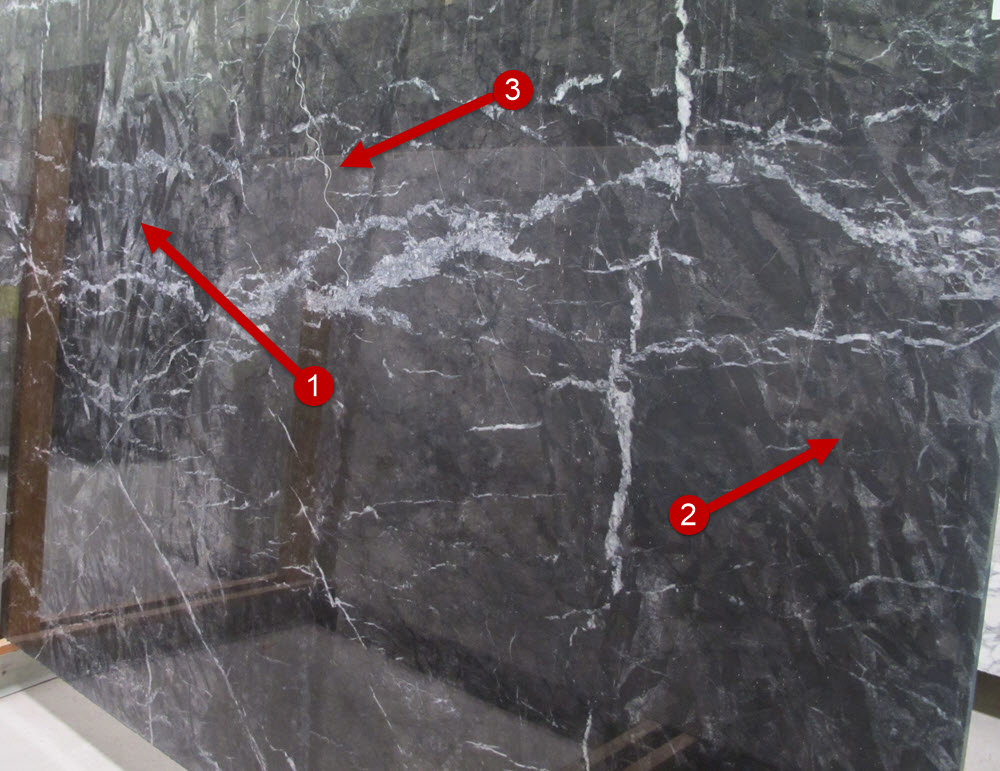 Inclusions to look for when choosing a dark marble slab: 1 & 2) Dusty-looking splotches. 3) Fractures.

With all the inclusions, they will try to avoid them when marking out the cutouts, and they’ll email us the photos so we can sign off on them before they cut the stone.

When we made our initial selections at prestart, I’d randomly selected the Mitred Fascia as I thought this looked like the best available option on the Bravvo Stone website. Turns out there was a reason for that, it also happened to be the most expensive one! Good to know my ability to choose the most expensive option is still quite finely tuned. 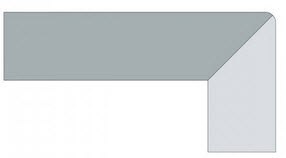 The reason for this being the expensive option is simply the amount of work involved, compared to a laminated join. Laminated simply means that 2 pieces of stone are layered on top of one another.

The mitred fascia is a true mitre, whereas all the other edge profile options are two pieces of stone laminated together. Mitres are always more expensive due to the labour involved in getting the angles right at the join. 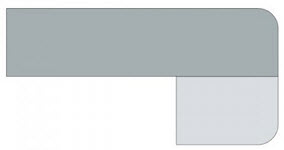 There are 2 main reasons for us choosing this profile.

2. According to Bravvo, this is especially important as we are using a plain white stone for the benchtops (Essastone Bone White) – the laminated profiles are apparently more noticeable in white stones.

In terms of scheduling, we’re still a couple of months away from getting the stone installed. I foresee much excitement when this finally happens.