The title of this post might give away my feelings about our new marri floorboards. I think they’re beauuutiful!

Here’s the scoop: we decided on Standard and Better grade, with the boards 130mm wide and 13mm thick.

Why marri, you ask? I’ll be brutally honest with you – I don’t consider the marri to be a particularly good looking tree. In fact, I’d call it a bit of an ugly duckling, with a face only a mother could love. But the marri is burned forever into my psyche by virtue of the first ever “real” job I got fresh out of uni. (Back in the day, we used to call marri trees by their then botanical name, Eucalyptus calophylla. But then the scientists went and changed the genus to Corymbia. I’m inexplicably bitter about that.) Anyway, back to the point, marri trees are often seen mingled in with jarrah in the forests of the Darling Scarp and South West, which is where I spent a few years mapping dieback disease (Phytopthora cinnamomi).  Luckily, marri isn’t affected by the disease, but it is susceptible to cankers.

Back in those days, marri was considered to be good only for firewood. But our ugly duckling has grown up and is now in hot demand for furniture and flooring, as the beauty of the feature veining caused by the resin is now becoming apparent.

Some interesting facts about marri:

You could be forgiven for thinking that with a disease called Jarrah Dieback, I might like to have jarrah floorboards. But, been there, done that, and I found jarrah too hard to decorate in the style that we want. Sadly, the best photo I can find of the jarrah floorboards in my old house is a picture of a wardrobe containing nothing but a wig on a wire head, which I’d previously used on gumtree in an (unsuccessful) attempt to sell said wardrobe.

So marri it is, and I couldn’t be happier. I’ve been looking at each individual board, marvelling at the differences in colour, tone, veining, and so on. I could stare at it for hours!

Our site supervisor from Nulook Homes kindly allowed our flooring guys to install the floorboards before handover. From our end, this process has been smooth and means one less thing we have to worry about organising after handover.

The timeline has been as follows:

This part of the installation involved the cutting and gluing in place of the floorboards. Then it will sit until handover, waiting to be sanded and sealed. During the wait, the wood will apparently acclimatise to the humidity. This might see gaps enlarge or diminish in size. 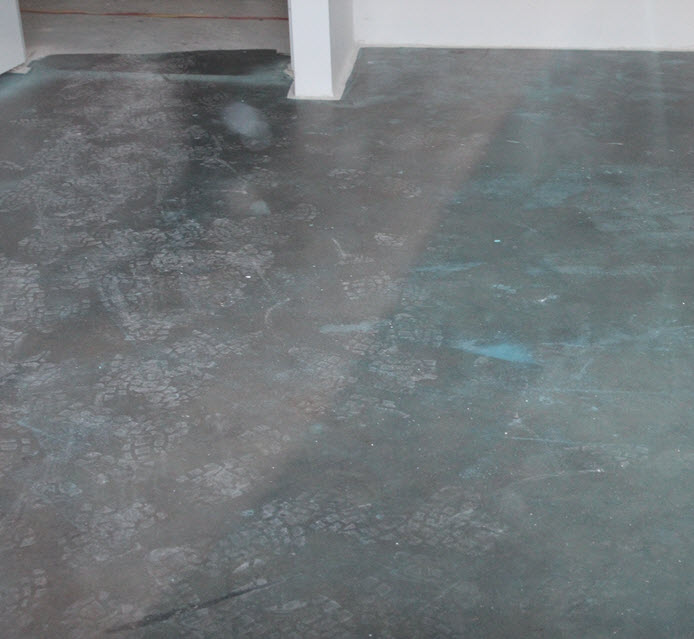 This shows the extent of the waterproofing – the floor is painted to just beyond the edge of the doorway. 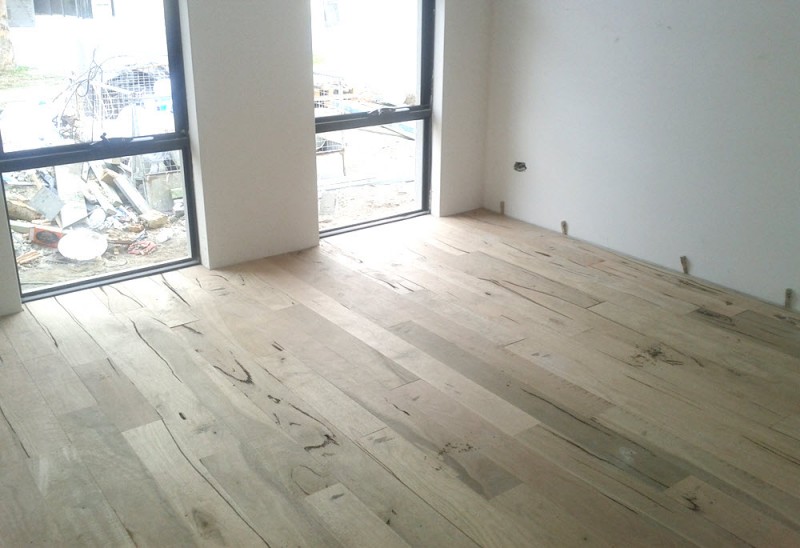 Behold the beauty! Marri floorboards in the guest bedroom. 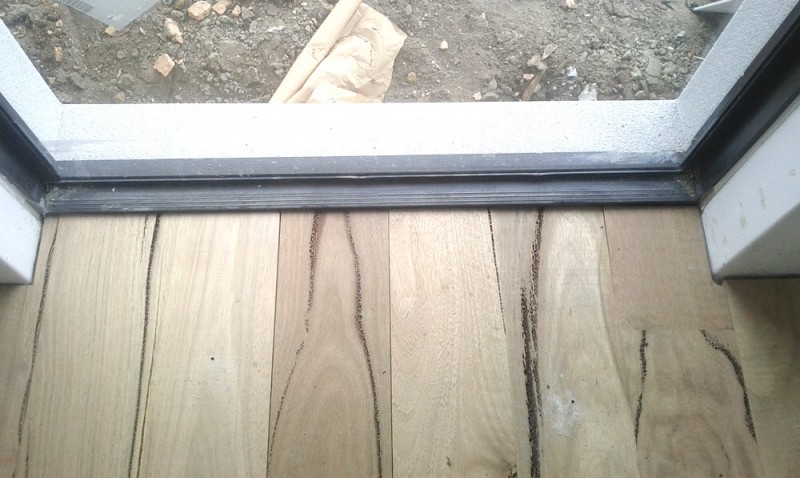 How the floorboards have been cut and fitted to the window at floor level. Can you see the unfortunate dent in the window frame? (Hint: It’s on the bottom right) Apparently this happens a lot and the guy from Jason Windows comes out and does a massive touch up towards the end of construction. 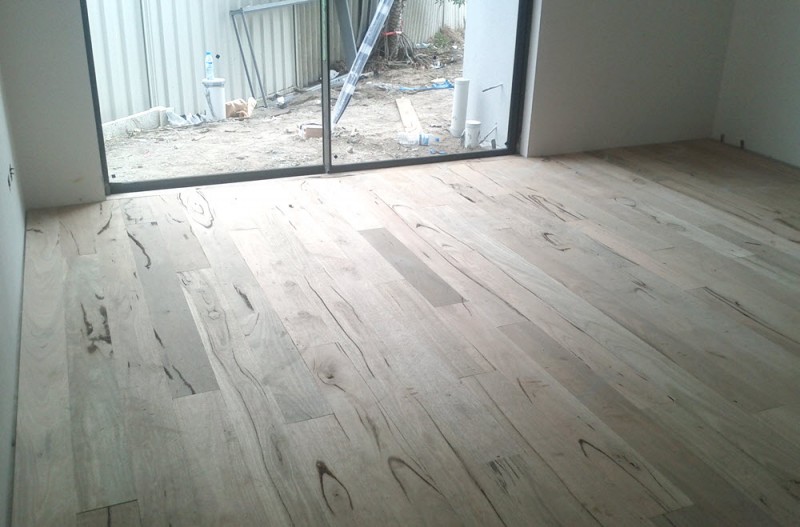 Marri floorboards in the master bedroom. 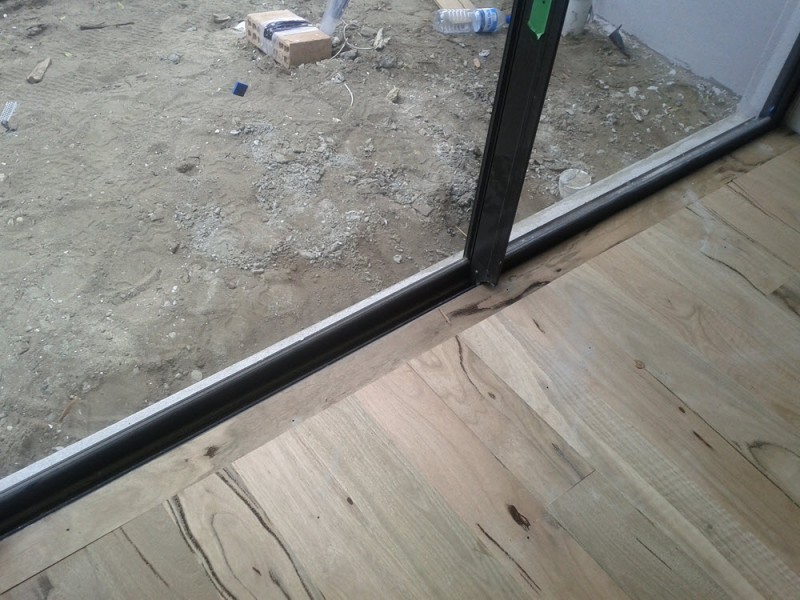 At the sliding door, we asked them to finish with a strip of wood parallel to the doorway, to give a cleaner finish. 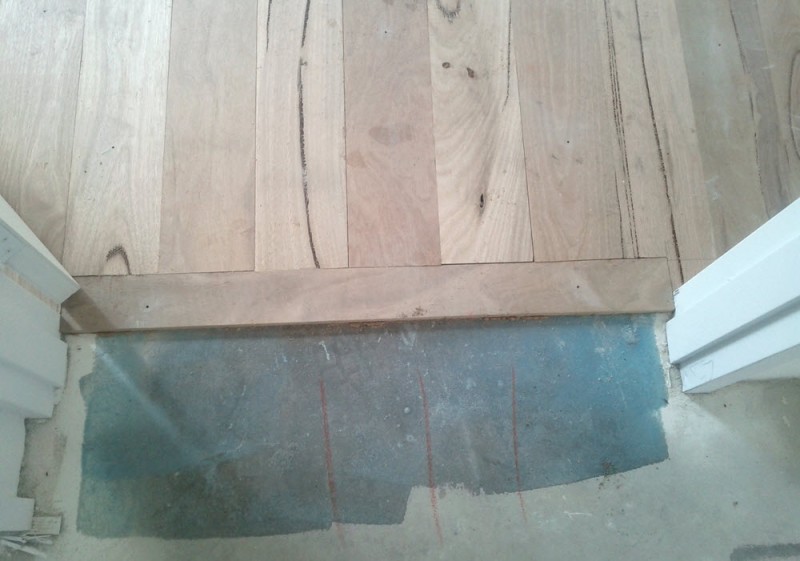 In the doorways, the boards are finished in a similar way. This makes the transition to the rest of the flooring a bit nicer.

We still haven’t decided on the final finish. I got a call from Chelsea Flooring the other day, and they mentioned that their showroom is being refurbished and should have a display of the different finishes in about a month. So will wait until then.

Also to be decided is the profile of the skirting boards. The front-runner is the half splayed profile, but I’m a bit concerned about the gappiness against the square door frame.

This profile is quite square, but is saved from being too boring by a thin groove in the top third. This subtly echoes the groove in our Deco internal doors. I’ve seen a similar profile at a display home where someone had inserted a leather strip in the groove – I’m thinking a similar effect could be had by painting the groove black. You’d need a very steady hand though.

Another contender is a stepped profile, which echoes our trio cornices. I’m not sure how easy it is to find this profile locally though.

What timber flooring do you love?