A Tour of Josh’s House

I may have mentioned Josh’s House before on this blog. The house was completed around about the time we started our building journey, and, using the same architect and having similar aims, I’ve been a keen follower.  I’ve devoured most of his website and have downloaded pretty much every fact sheet (downloading is the same as reading, right?).

However I missed out on going to the opening days, seeming to always have something else on that day. So when the opportunity came up this year I grabbed it with both hands. This year, Josh’s House  was only open for the Solar Dwellings Sustainable House Day bus tour, so we were incredibly luck to get a look. This was the fourth stop on the tour, just before lunch.

Pulling up outside the house in our big bus, Josh was there to greet us, and gave a short intro before leading us around the back to his house. For the uninitiated, the Josh’s House project consisted of building two 10 star energy efficient family homes, intentionally using conventional building materials and construction methods so they can be easily replicated. All the plans are available online, if you want to have a look. So, Josh’s House is at the rear of the block, and his sister lives in the front house.

You may also know Josh from Gardening Australia – so obviously a lot of people were interested in his gardens. May I say, they did not disappoint! From the front verge to the veggie patch out the back, everything was well thought out and looked beautiful. 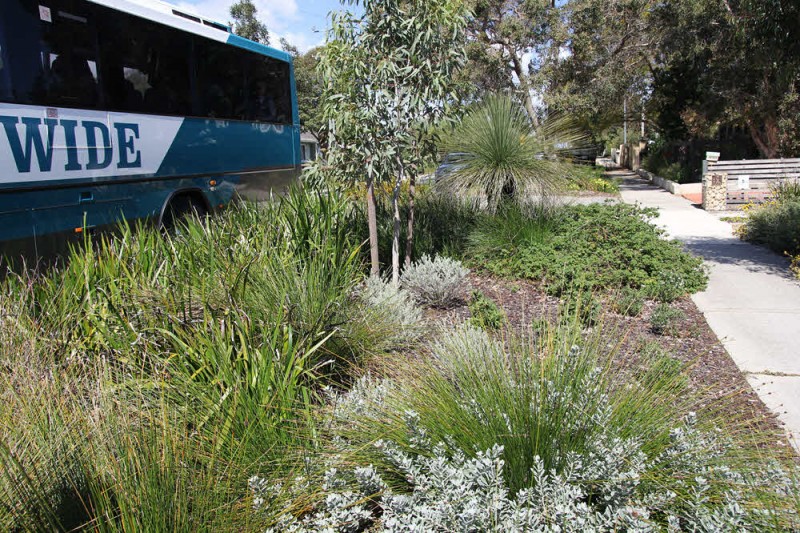 The verge outside Josh’s House. Great contrasts and textures in the plant selection.

Aside from the verge, the front garden was the first thing that stood out. Clearly waterwise, but certainly not boring. I love the informal nature of the firepit and conversation area – you can easily imagine being out here, having a quiet drink on a cool spring night, crickets chirping. Surely there would be crickets? I also love the yellow pom-pom flowers here, the perfect foil for the silvery foliage. 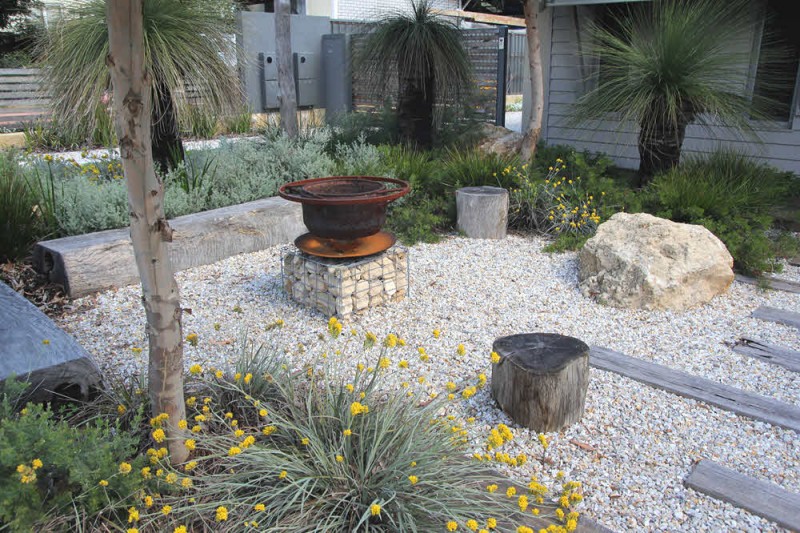 The front garden at Josh’s House

Walking along the driveway at the side of the house, I spied this little beauty near the rainwater tank. Be still my heart, this is one of my favourite plants ever! Pair it with a purple hardenbergia and I’d be in heaven. 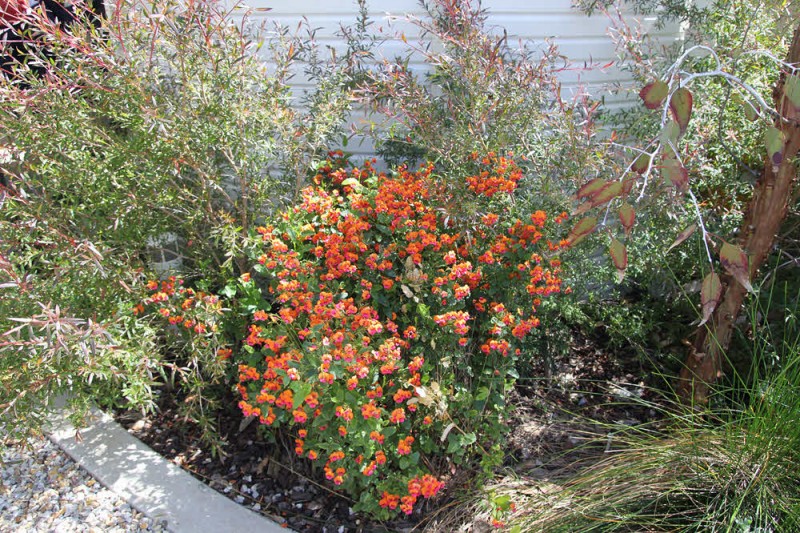 Pretty sure this is a Kennedia coccinea aka Coral Creeper

Before letting us loose around his house, Josh gave a short spiel about the house and gardens. And then he pointed out the awesome thing hiding in his garage. In this picture, you can see 4 pipes running up the wall. What could that be? 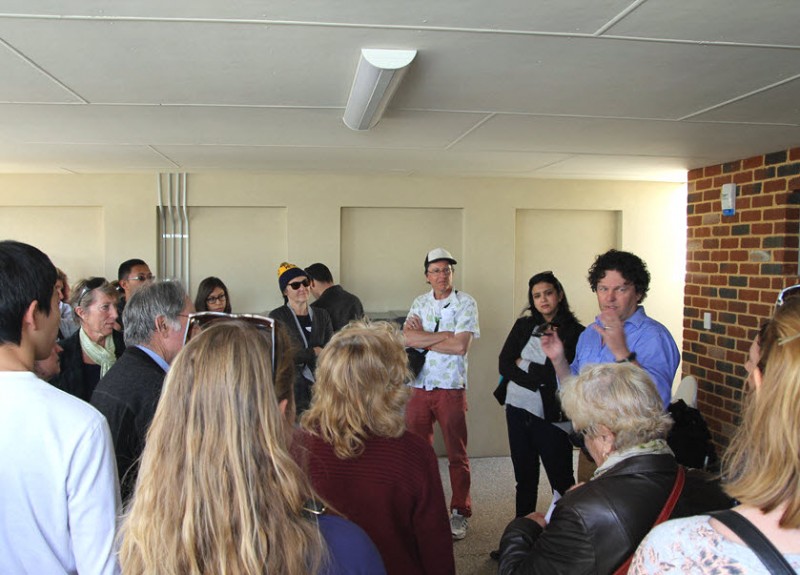 Josh giving us a short introduction to his house and gardens

I admit to getting a little bit excited about it because I’d wondered about this a few times of late. Spoiler alert! It’s a battery! A battery for the house! Specifically, it’s a 10kW storage system for excess generated solar power. It’s a Chinese model, costing around $15,000 and is said to have a lifespan of 15-20 years with a 10 year warranty*. That’s pretty much all I know about it, but it’s very new, as in it was only installed last week. The Josh’s House website will soon be updated with all the interesting detail, so it’s one to keep an eye on if you’re into that sort of thing.

Here it is in all its glory: 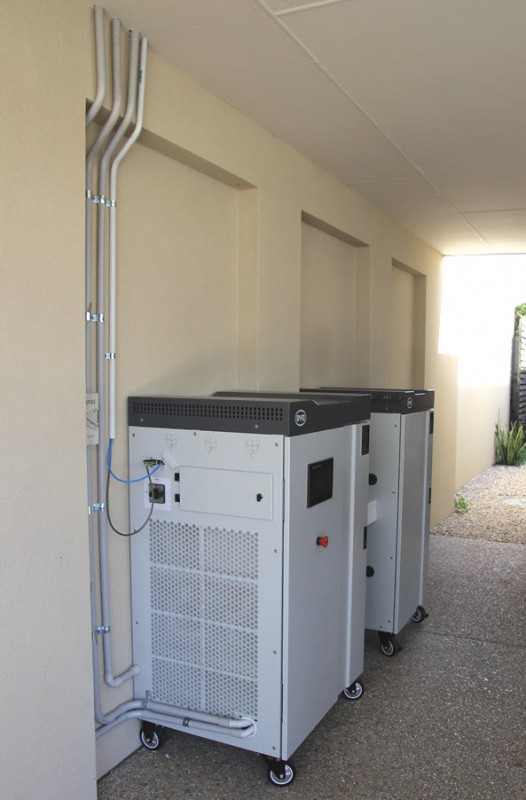 It’s so new that it took them 12 months to get approval from Western Power, the problem being that they had to make sure that the power couldn’t make its way back into the grid. Coincidentally, the prettier-looking Tesla Powerwall was all over the news today, but goodness knows how much that one is going to cost. But while the cost seems high at the moment, it’s worth bearing in mind that before the government rebate scheme a few years ago, solar panels used to cost the same. In a few years, with the right incentives and the right level of take-up, we will probably see a similar price drop here. 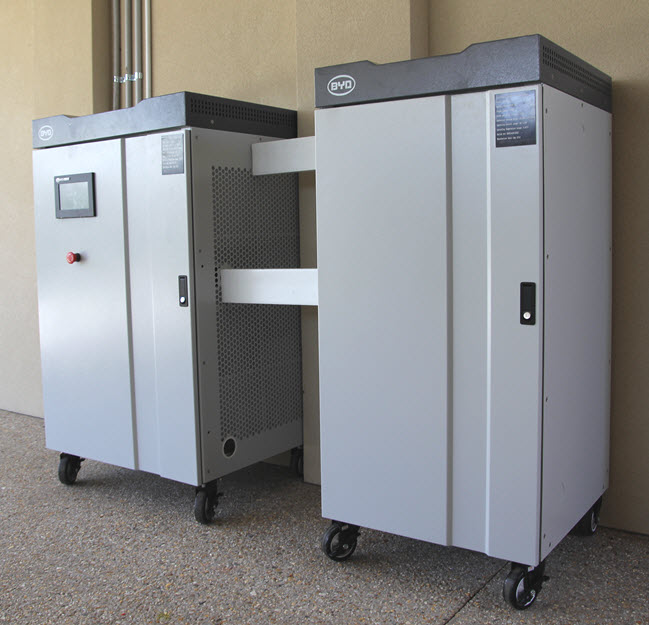 I didn’t have much time to marvel at the battery, I needed to get to see the rest of the house, so inside I went. Josh made the comment that for them, the house was all about the indoor-outdoor connection, the rest was just utility. With the entire family being keen gardeners, you could see why this is the case! The house is styled for relaxed living, with sweet little vignettes hidden away in the odd corner, such as this split leaf philodendron in a shiny rubbish tin, which contrasts beautifully with the turquoise sideboard. 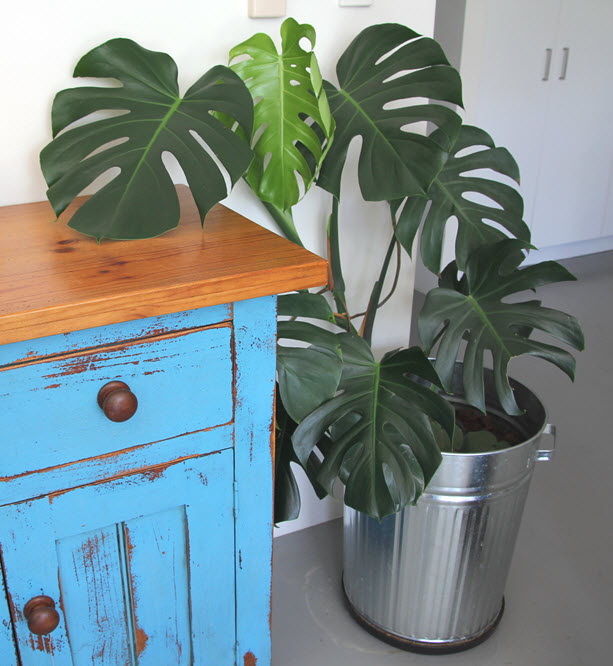 In conversation recently, I mentioned that the Ficus benjamina was the first house plant I ever owned, and I was pleased to see it in the house here, tucked away in the TV room and allowing the artwork to shine. 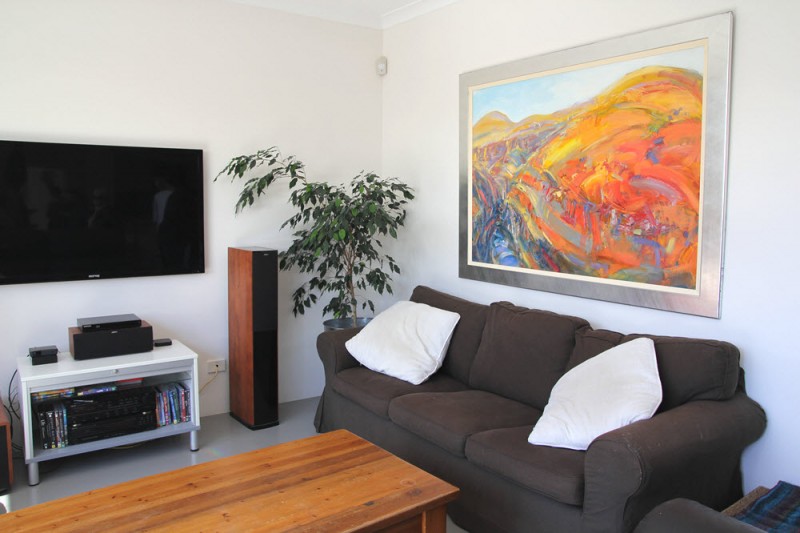 The colourful craft corner also gets its daily dose of nature with this stately Strelitzia. 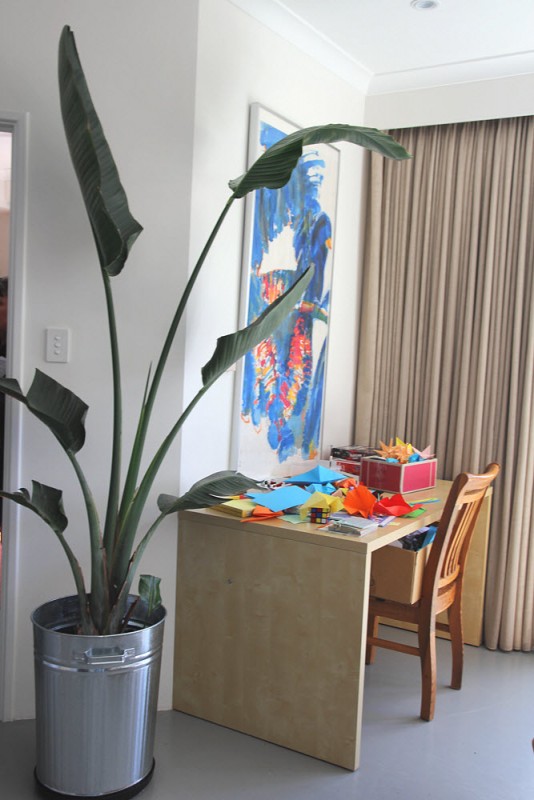 When you step outside, it’s obvious that this is where the action happens in this household. I wish I’d gotten more photos of the deck and entertaining area, but you can see more on his website. 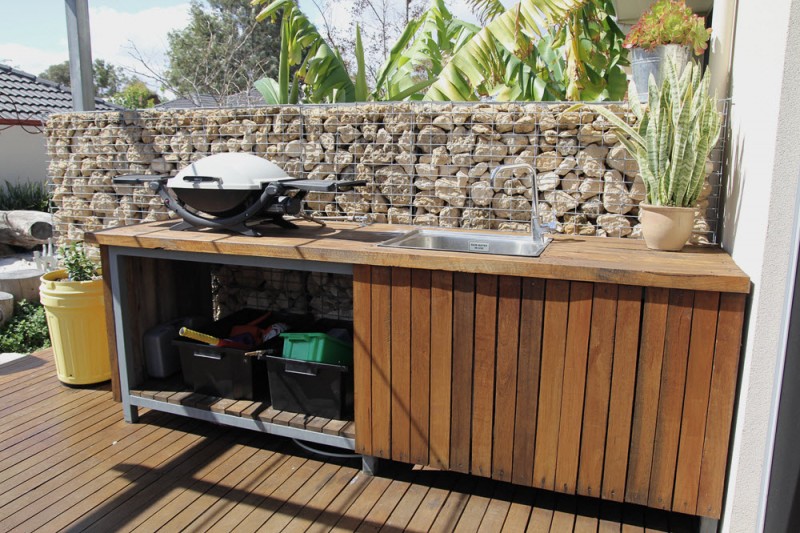 And wherever there’s a corner, there’s another pot plant tucked away. 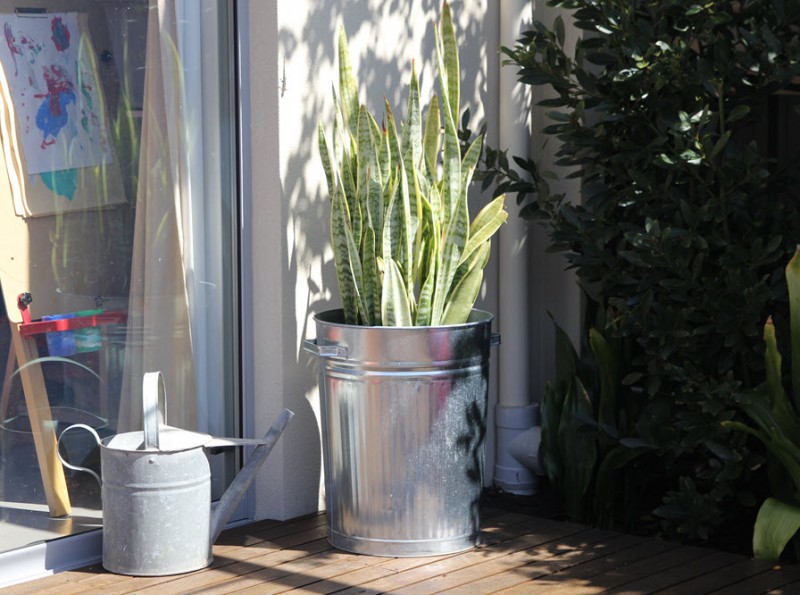 I nearly died when I saw this gorgeous little critter hiding in a corner (if you’ve been following my Facebook page, you might recall my gargoyle birthday gift). Gargoyles are back, baby! 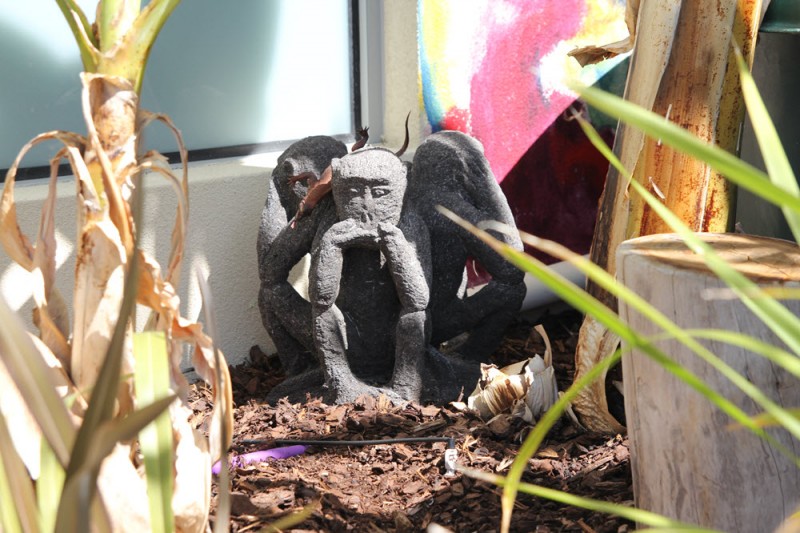 This is the point where I had to start frantically deleting old photos from my memory card, as apparently it was full. Apparently, I take a lot of photos, which is no surprise to anyone who knows me. So with a tinge of regret, I deleted the bushwalking photos, but I’d copied them across to my computer so it was basically just clutter anyway. Sadly, it seemed like there wasn’t enough time to take everything in appropriately, so there are a lot of things I’ve probably missed here.

But, I did manage to take a few more photos of the garden. Here is a wonderfully sunny corner of the garden, presumably outside a bedroom. Now this is where you would soak up some winter sunshine! 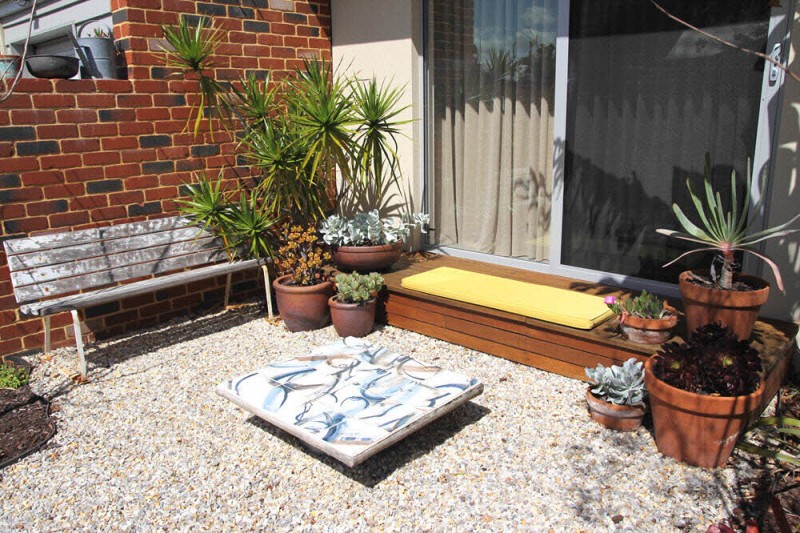 Not forgetting the sustainability features, here is how rainwater is harvested for the 20,000L water tank, which supplies water for about 8 months of the year. Note the leaf catcher, this is part of the system that helps keep the water clean. 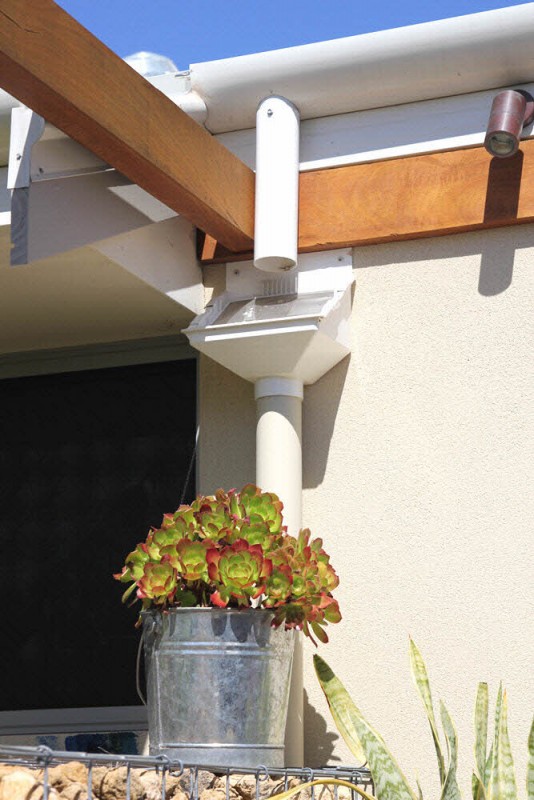 Last picture. I couldn’t help but admire these beautiful timber garden doors, connecting the driveway with the veggie garden. The hint of bouganvillea lends a very mediterranean feel to the space. Gorgeous. 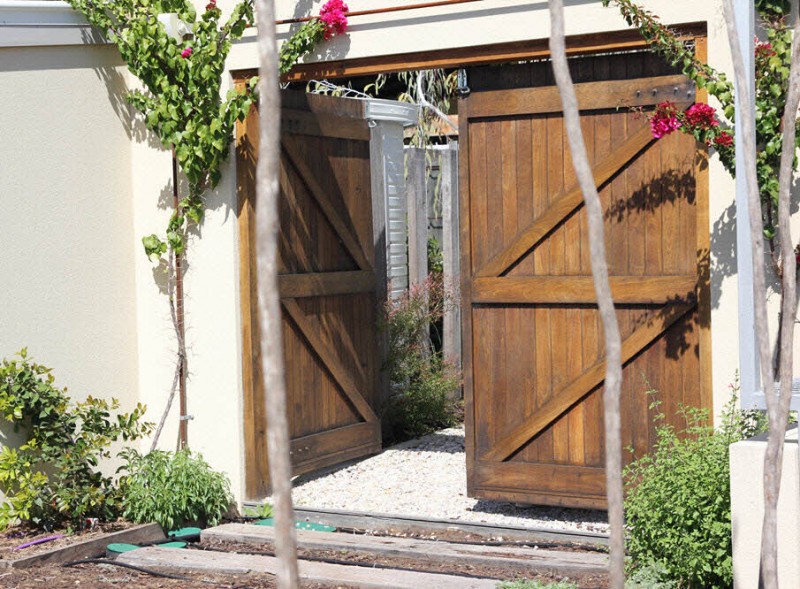 *Edited for accuracy by request.